Why not imagine bulldozers don’t exist? 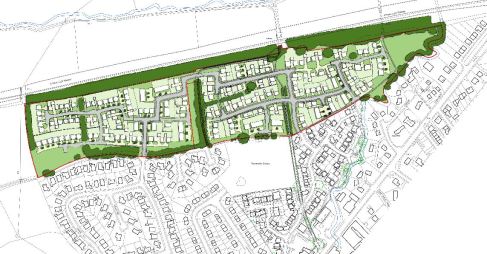 An urban extension has been proposed to the village of Scisset in Kirklees, which would see significant green space built upon, and the demolition of this farm:

Yes, we need houses, and yes we need to revive the construction industry, but should we be enumerating the commuter contingent that fills the route to Leeds to capacity each day? Rather than 200 residences covering the footprint of an entire farm, why not build denser housing nearer to Leeds, regenerating the industrial South Leeds fringe and saving on endless carbon emissions? I fear that because Scissett = Villiage + major A-Road, it is for a developer a much simpler market in which to sell his wares.

And why does the architect ignore the existing layout of tracks and boundary walls? Good urban design does not decimate all that is, but organically builds upon existing components. If you must build endless housing in this tiny village, why not adopt some principles of sympathetic design. Why not imagine that bulldozers do not exist.

Fulford Hall to be demolished

Fulford Hall is set to be demolished. This building once housed Penistone Grammer School, which has now moved to a modern complex down the road. This follows the demolition of Broomhead Hall in Penistone in 1976:

Palatial in appearance, it is quite strange that a developer can not see any reuse of this building, other than a carte blanche brownfield site. So often we rue how throughout the 20th century, stately homes were demolished with an ideological zeal, yet here we are, readily allowing an architectural marvel to be lost for the sake of a few detached houses and their accompanying commuters.

Justification through extolling that ‘no use can be found for the building’ does not wash with me. Barnsley council, you have now set a president and nothing is safe from the wandering eyes of the speculator.

And by the way, Penistone Grammer school has I’m sure lost a lot of prestige by moving from Fulford Hall to a (purposefully?) rusting aluminium warehouse.

For  list of stately homes demolished in the 20th century, see http://lh.matthewbeckett.com/lh_complete_list.html

We’re too late to save this masterpiece now, yet this is only the first of many, and its time to up the ante. This could have been 30 or more innovative residences, but we are going to get a handful of generic suburban boxes.

Its only a church, get rid 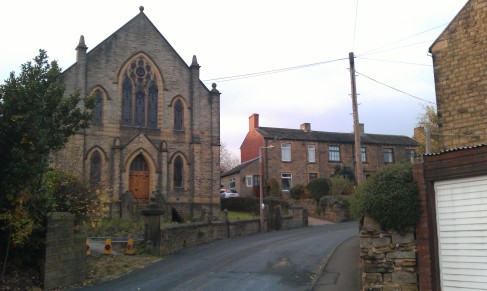 This week sees the application to demolish the Wesleyan Church on Gib Lane in Skelmanthope; a street which is seamlessly historic, and is vital to the fabric of this small West Yorkshire town with a fascinating social history.

A similar chapel has already been successfully converted into flats within Skelmanthorpe. Lets not be lackluster with our housing. Please oppose this application by contacting Kirklees council.

I wonder what will happen to the stonework throughout the building engraved with the names of patrons of the church. It would seem their eternal homage in civic infrastructure will not be so trannt.

Parish School to be demolished by Parish Church

A minor victory this week. Kirkheaton Parish School, which was set to have an application (from the Parish Church) to demolish passed this week, has been deferred for a little while longer as English Heritage are consulted regarding the merit of the building. Special thanks to the Victorian Society who wrote to Kirklees council to request this. I will keep you posted on the outcome of this consultation.

I was recently told that the justification for passing this planning permission was that ‘although the loss of a historic asset would occur, the financial return for the develop would be maximized under this scheme’. Forgive my ignorance, but you don’t need a planning system to enforce the rules of economic calculus. The planning system should literally be doing the opposite of this.

The economy is picking up. We’re building again. But I’m worried the wrong people are going to build the wrong buildings, in the wrong places.

We have a housing crisis, that we can not deny, but this is not an excuse for an open season for volume house builders to forego considerations of community, environment and history.

Over the next few years, we are going to lose much of our environmental and cultural heritage to the bulldozers of housebuilders. I intend to do all I can to mitigate against this suburbanisation, and this plight begins here. I aim to detail every profligate proposal that will undermine our built environment and the values of an urban renaissance.

This is not for the Nimbys. This is about insisting those who plan and build are more innovative and listen to the communities which they serve.