An application for prior approval of the demolition of a series of High Street buildings in the town of Starbeck near Harrogate:

Built as Harper’s Grocery (a name still embossed in the stone), this building has stood derelict since a fire in 2018, which destroyed the roof and left the structure beyond repair, at least in the words of the developer.

The Conservation Officer in this instance has his hands tied by the fact that the building sits just outside the conservation area, albeit next door to a listed church. He has urged the reuse of the historic facade, but the plans show the building being replaced:

The building appears to be of a high quality, taking cues from the current structure. A good planner would manage to get the impressive facade retained, with any new development built of matching stone. The pre-application dialogue, not being a matter of public record, probably has established the outcome of this site already.

The redevelopment is supported with suspicious alacrity by the Ward Councillor. Fires, irreparable roofs, and zealous politicians always ring alarms bells with me. I’ll say no more…

Plans to demolish and redevelop the former Debenhams building in Harrogate:

It was bound to happen. The collapse of Debenhams has left a vacuum of listless retail space in every high street across the country. Asset managers know they can’t find another department store tenant in the age of Amazon, and so we are going to see more and more of these Victorian/Edwardian department store buildings purged.

This is a particularly egregious example. Harrogate prides itself on its heritage. This is a Victorian spa town, and thousands flock there each year to see this charm. If you demolish it, then you will slowly lose that pull, and Harrogate will become irrelevant. Enough of the town was already lost to the concrete before the planners realised how precious Harrogate is.

This is a genuinely stunning example of Edwardian commercial architecture, with the striking wall end gables well suited to a highly prominent corner plot.

The building is quite clearly robust and has operated as a retail premise since the very recent collapse of Debenhams. There is absolutely no need to redevelop this site from the ground up. The only justification cited is the split levels and the nuanced space designed for retail. I am not familiar with the interior layout, but if it was operating as a modern department store in recent history, then surely it is still fit for purpose? Architects are supposed to be able to offer solutions to this kind of thing aren’t they?

This reason alone can not justify the loss of such a landmark building, which is in a conservation area and surrounded by listed buildings. If this building is lost, Harrogate Council will have proven that commercial interests trump heritage designation. There is no clearer example of when a planning authority needs to say no.

It is very sad to see that Heritage England, and the Harrogate Civic society are both supportive of the demolition. The County Council also appears confused, and has declined to comment because it is ‘a change in use’. How odd.

The heritage assesment that will ultimately condemn the building is by Woodhall Planning & Conservation. It must have been a strain to write up a report that recommends demolishing such a building. Describing this as a ‘redundant and tired building’ and claiming that the new introduction will bring ‘vitality to the conservation area around the clock’ is laughable. How do you sleep?

I urge any readers to get their comments into the Council as soon as possible.

Its very difficult to discern what parts of this building re original and what have been replaced. The filletted brick corner shown above appears to be original, but the lack of spalling on the other flank of the building would suggest it was repaired latterly.

Nonetheless, the value of this builing comes from the paucity of the original industrial fabrc left in this quarter of Leeds. Formerly a joinery, the six compacted gables to the roof endow this street with glamour and belie its industrial function. If Leeds has any aspiration for cultural regeneraton, and a ‘quartering’ strategy for its city centre, it needs to hang on these modest yet vital buildings. Last month we saw the final remnants of the historic South Bank dissapearing. This is the same story.

Perhaps the loss of the neighbours (the Synagogue, and iconic The Brunswick Stadium boxing venue) are more lamentable, however they are gone, and as of writing, this is not.

Shown above in 1951 as the joinery works, Lower Brunswick Street was complete. No gaps for surface car parks. A full frontage.

An earlier map from 1933 shows the Synagogue and boxing venue also on this street.

Demolition to demolish a high street building in Sheffield:

A modest but important part of the street frontage along London Road in Sheffield City Centre, this Victorian building with the painted wooden window trim is exactly the sort of building that urban designers long for. Its frustrating that we are pulling them down.

The application seems to have been withdrawn, but no doubt the applicant is redoubling, making some amendments, before they come in again. The ground floor elevation has been modernised possibly in the 1980s, but behind the mosaic paneling there is likely to be a Victorian pub frontage as per the historic maps:

Sheffield has a fascinating city centre. Lets keep it that way and look after its history.

Beachfront cinema in Redcar has been demolished:

Built in 1928, the cinema is to be replaced by a newer cinema building, so thankfully Redcar won’t be losing the amenity of the cinema.
The art deco elevation will be missed form the sea front, offering a glimpse of the golden age of the British seaside town.

Lets hope the new building helps to revive Redcar as a destination for weekend revellers. Once we are allowed to revel again.

Three buildings to be lost, including the Shakespeare Pub, for public realm improvements in Scarborough:

This is one of the strangest public sector led planning interventions I’ve seen.

The design statement also states that the setting will be improved as the building heights currently in place demonstrate too much variety, and that the notched corner is incongruous to the chamfered corners found elsewhere.

This is some of the most tenuous post-rationalisation I’ve ever heard. The removal of a pub will have the inverse effect to that intended, the variation in building heights offers modulation to the street frontage, and the notched corner provides an already sufficient amount of public realm for the cafe.

The loss of the buildings will also reveal a brick edifice, and a bare gable end which looks to be intended for some council sponsored public art. Get ready for rainbows and unicorns and holding hands.

Vociferous objection from Heritage England and many local groups have largely been ignored. If this was an application coming from the private sector, it would be refused without delay. However, as it is in the interest of Argos (the develop of the adjacent plot), and as the applicant will also determine the application, this will almost certainly happen.

I’d like to know the cost of this project. Compulsory purchase orders of three town centre commercial buildings, demolition costs, development costs, and revenue budgets for maintenance, will likely make this vanity project a pricey one for the Scarborough folk. And the loss of three residential dwellings is also a factor that has been completely overlooked.

Lets not go back to a time in which local authorities wield their power to clear buildings with the cavalier alacrity of the 1950s, only to regret it a decade later.

A number of buildings to be replaced by a single development: 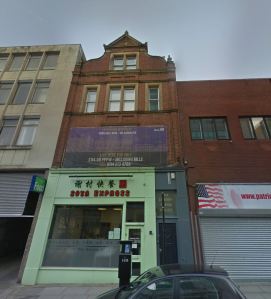 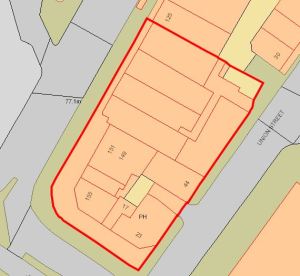 I wasn’t sure whether to create this post, as the proposed development is actually very good, demonstrating an active frontage and strong elevations. However, my issue is with the massing of the development; it has completely ignored the urban grain of the buildings it looks to replace.

The site is currently occupied by 9 different buildings providing variety and rhythm along the street front. This configuration will have evolved from the medieval period to arrive at this complexity of built form.

Due to land assembly, the milieu of buildings will be replaced with one monolithic building, demonstrating no variation of detailing along the street front. This is seen throughout provincial cities. Land assembly is damaging to the preservation of urban grain. Scale is everything, and plot shapes and sizes should be in of themselves seen as heritage assets. 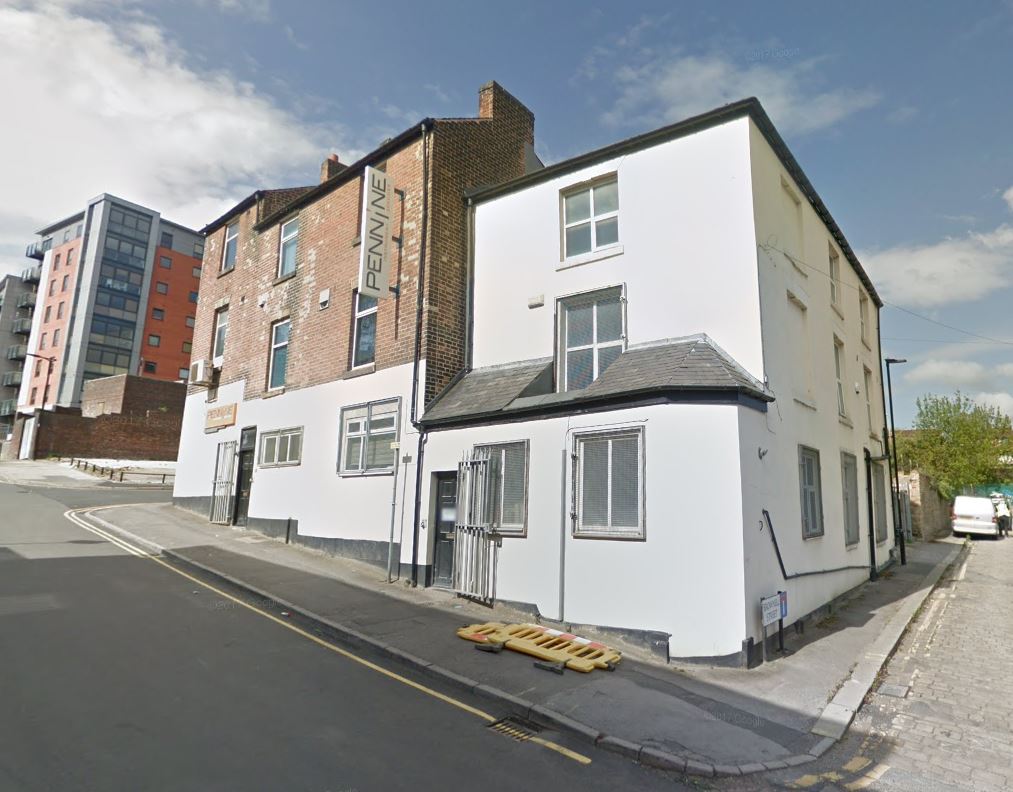 Sweet cluster of buildings to be needlessly demolished and replaced by flats. Do the develops not understand that the very market to which they appeal likes old quirky urban high streets.

I adore these buildings, which would never pass by  building regs these days. And that is what makes them geometrically interesting, inimitable, and human.

Application to demolish a number of Victorian Buildings along a back lane in Leeds City Centre: 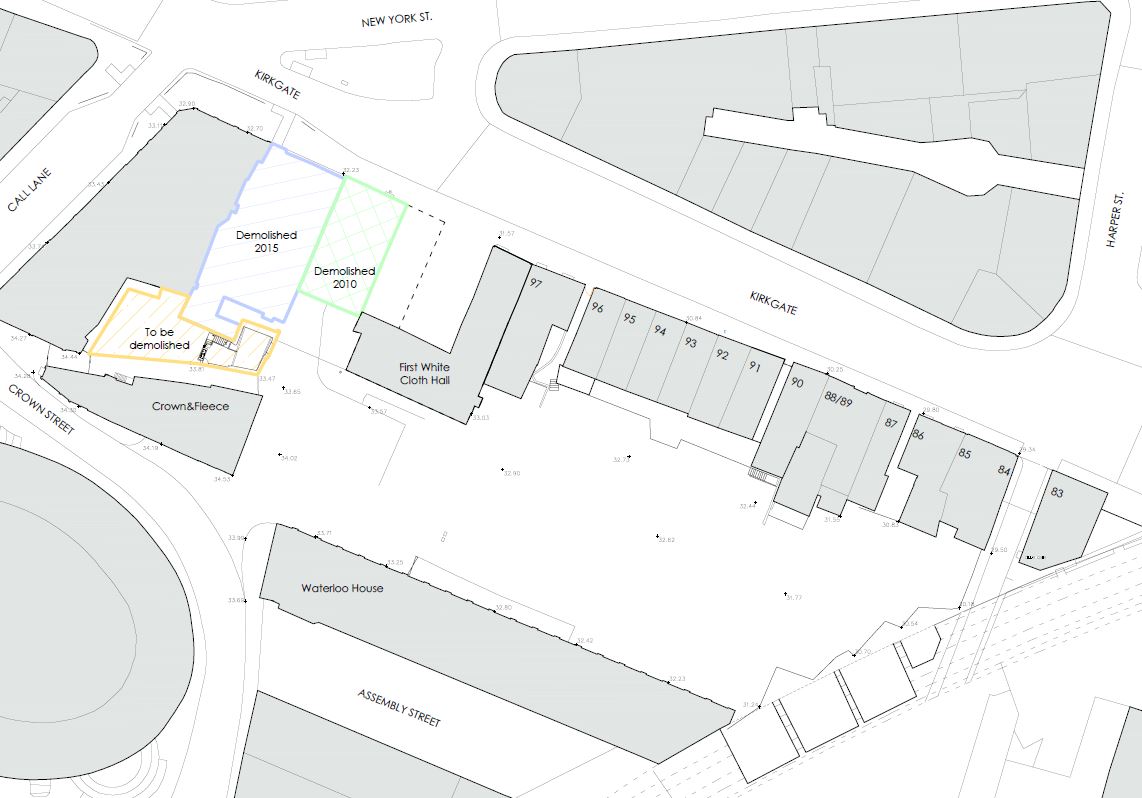 What concerns me about this application is not the loss of the buildings – albeit reprehensible to destroy the Victorian urban grain – rather it is the opportunity cost of developing this site and not creating much needed city centre green space that dismays me.

This could have been a beautiful setting for some breathing space in Leeds, with the backdrop of  a railway viaduct, the disordered roofscape of Kirkgate, and the Corn Exchange.

The Victorians would have ensured this space was civic. How they did that seems to be a lost art.